Riding on the success of its winter concerts, the Naples Bay Resort and Marina has expanded its musical event to the summer months.
Enjoy the sounds of Motown and a Chicago tribute band at The Pointe, an intimate, waterfront venue located at 1500 Fifth Avenue South in Naples.
“We are building on the success of our winter concert series, and bringing music options to our local residents for the summer,” says Paul Ditheridge, director of marketing and sales at Naples Bay Resort.
The summer series kicked off in June and continues through August. Back to Chicago – A legacy of rock and horns, plays Sunday, July 14 and Aug. 11 from 7 to 9 p.m.
Back To Chicago is the area’s only true musical tribute to the famous band Chicago. Do you remember ”25 or 6 to 4,” “Beginnings,” “Does Anybody Know What Time it Is?” What about “You’re My Inspiration?” Concert attendees can enjoy an evening of a legacy of rock and horns dedicated to providing a musical experience next to none.
Band members include Rick Grootveld – sax, flute, vocals & percussion; Stu Shelton – keyboards, vocals, sound engineer & arranger; Doug “Baby Face” Thompson – percussion & vocals; Denny Scott – guitar & vocals; Alex MacDonald – trombone, vocals, percussion & arranger; Manny Lima – trumpet, vocals & percussion; Jimmy Allen – bass guitar and vocals; Guy Franklin – vocals, percussion, creative; and Frank Gump – lead vocals.
An evening of Motown will be presented Sunday, July 28 and Aug. 4 by The Ex-Bachelors. Both of those shows will run from 7 to 9 p.m.
The Ex Bachelors were formed as an original group of talented musicians playing some great original songs and also some of their favorite rock & roll and blues songs. The Ex-Bachelors are a six-piece Motown and soul band. They are an eclectic group of musicians from all over the world that came together in 2012 to create a unique band. All the members are multi instrumentalists, so it’s not unusual to see them switch instruments (sometimes mid song!) or even play two at the same time. Whether it’s a funky Motown groove or a soulful ballad, the Ex-Bachelors are sure to move you.
Band members include John Azarow, guitars, bass and vocals; Lee Blackston, bass, piano and vocals; Cary Vhugen, guitar, bass and vocals; Rob Platter, drums; Simon Brooker, horns; and Alex Granados, trombone.
The unique venue is intimate for the entertainers, and the room is set up to emulate the style of cabaret theater shows, Ditheridge says.
The concert series was started “recognizing the demand for live music in the south Naples market in an indoor concert environment – which is lacking in the market,” adds Ditheridge.
Tickets are $45 for each concert. For those interested in dinner and a concert, those tickets are $85 each. Buffet dinner is followed by the tribute concert (dinner is served from 5 to 6:30 p.m.). Tickets are subject to sales tax and booking fee.
For more details and ticket reservations, visit www.naplesbayresort.com/concerts. 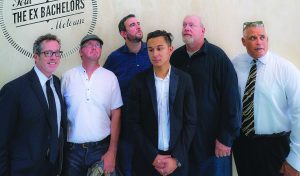