Florida Repertory Theatre’s 2021-2022 season continues with a reimagined remounting of its 2020 production of “A Doll’s House, Part 2” by Lucas Hnath. One of the hottest new comedies in America, the play was set to open in March 2020 but was shut down just one day before seeing its first live audience. The 2022 staging reimagines the production for the ArtStage Studio Theatre and runs from Feb. 25 to March 27.

When the pandemic closed the production in 2020, Florida Rep offered a professionally filmed version for online streaming. The virtual production caught the attention of the late drama critic, Terry Teachout, who counted Florida Rep “among the finest” regional theatres in the country, and said its staging of the play “rises where the original Broadway production stumbled.”

Florida Rep is pleased to welcome back many of the same creative team and cast as the 2020 production – including ensemble Director, Chris Clavelli, whose work in 2020 received high praise from Teachout. “Chris Clavelli has wisely staged [A Doll’s House, Part 2] less as a Major Political Statement than as a domestic comedy with feminist overtones…Mr. Clavelli, a 20-year member of the company’s ensemble, long ago proved himself to be as sterling a director as he is an actor.”

The Tony-nominated play is a contemporary sequel to Henrik Ibsen’s now-classic work of modern drama, A Doll’s House, and picks up fifteen years after Nora Helmer closed the door on her marriage and family. What happened to the iconic heroine next? This bitingly comic sequel imagines her knocking on the door she so famously slammed more than a decade earlier. Now a successful writer and independent woman, a skeleton from her past has her returning home seeking help from her ex-husband. In this smart and sophisticated new play, Nora finds that the family she left behind, including her long-suffering maid, has some choice words on her unexpected return.

“It was a heartbreaking decision to close A Doll’s House, Part 2 in 2020, but we knew we would one day revisit the production – and we’re so excited that the day has come nearly 2 full years later,” said Artistic Director, Greg Longenhagen. “Chris, the design team, and the cast put a tremendous amount of work into making this a unique and one-of-a-kind experience for a live audience, and while we were so happy to be able to offer the play as a streaming event, this piece was meant to be experienced live. The new staging in the ArtStage is even more exciting than the original, and we have new designers and new cast members joining the process who are bringing new life and energy into the process. You do not want to miss it!”

Original cast members Viki Boyle and Aishling Pembroke return for the remount to reprise their roles as the Helmers’ long-suffering housekeeper Anne Marie, and their now-grown daughter, Emmy. Boyle is a longtime ensemble member whose work at Florida Rep includes Outside Mullingar, Vanya and Sonia and Masha and Spike, and many others. Pembroke makes her Florida Rep debut again with the reimagined A Doll’s House, Part 2. 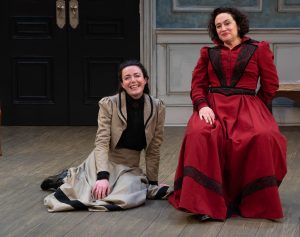 Joining the production as Nora and Torvald Helmer are Suzanne O’Donnell and ensemble member David Breitbarth. O’Donnell is a longtime company member at Orlando Shakespeare Theatre, where she played the role in 2019. Breitbarth is a company member at Asolo Rep in Sarasota, where he also played the role in 2019. He returns to Florida Rep’s stage after appearances in this season’s West Side Story”and previous productions of A Fox on the Fairway, Lend Me a Tenor, and many others.

Performances are Tuesday – Saturday at 7 p.m., Thursday, Saturday, and Sunday at 2 p.m.