The Americana Community Music Association welcomes Annie Wenz and Rod MacDonald on April 2 at 7 p.m. at the ACMA listening room located at All Faiths Unitarian Church, 2756 McGregor Blvd., Fort Myers.
Annie Wenz’s music has been heard on ESPN, as independent film scores, and from major league ballparks & Harley dealerships around the U.S., to TV and theater productions around the world.
After many years of loving a career as nursing supervisor at a psychiatric crisis shelter in Massachusetts, (while doing music for her patients and on the side), Annie’s music career called her to the road… (though she is still an RN)
Now Annie’s muse-a rama leads her from brilliantly poetic watercolor story songs about life, love and backpacking through jungles & villages around the globe… to vivid gritty & tattered hard ridden road songs penned during long distant blue highway trips on the 2 wheels of her motorcycle & 4 wheels of her camper as settles & travels & shares her music. 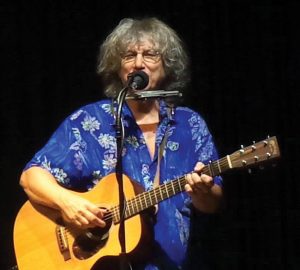 Rod MacDonald is a singer-songwriter, novelist, and educator. He was a “big part of the 1980s folk revival in Greenwich Village clubs,” performing at the Speakeasy, The Bottom Line, Folk City, and the “Songwriter’s Exchange” at the Cornelia Street Cafe. He co-founded the Greenwich Village Folk Festival, now a non-profit, and is still the president and co-producer of its events. He is perhaps best known for his songs “American Jerusalem,” about the “contrast between the rich and the poor in Manhattan” (Sing Out!), “A Sailor’s Prayer,” “Coming of the Snow,” “Every Living Thing” and “My Neighbors in Delray,” a description of the Sept. 11 hijackers’ last days in Delray Beach, Fla., where MacDonald has lived since 1995.
Door donation is $12 for ACMA members and $18 for the general public. For more info, visit www.americanacma.org