The Center for the Arts Bonita Springs has three major concerts planned for February.
Tab Benoit will perform Saturday, Feb. 5 and 6 at Hinman Auditorium. Grammy nominated singer, songwriter and guitarist Tab Benoit has built a remarkable career of gritty and soulful Delta swamp blues and has acquired a devoted legion of fans along the way, as well as five Blues Music Awards, two B.B. King Entertainer of the Year Awards, and he has been inducted into The Louisiana Music Hall of Fame.
Benoit will perform with Whiskey Bayou Revue featuring Josh Garrett and Alastair Green. Performances both nights are at 7:30. Tickets are $49 to $65.
BeauSoleil avec Michael Doucet will perform Saturday, Feb. 12 at 7:30 pm. at Hinman Auditorium. 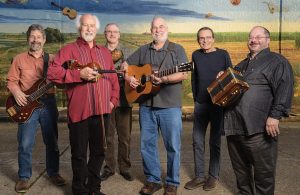 For the past 45 years, BeauSoleil avec Michael Doucet has been making some of the most potent and popular Cajun music on the planet and they are now back on the road with their farewell tour One Last Time—Au Revoir! Born out of the rich Acadian ancestry of its members, and created and driven by bandleader Michael Doucet, BeauSoleil is notorious for bringing even the most staid audience to its feet.
Their distinctive sound derives from the distilled spirits of New Orleans jazz, blues rock, folk, swamp pop, Zydeco, country and bluegrass, captivating listeners from the Jazz and Heritage Festival in New Orleans to Carnegie Hall. Since becoming the first Cajun band to win a Grammy with L’amour Ou La Folie and then a second Grammy in 2010, Live from the New Orleans Jazz & Heritage Festival, BeauSoleil has garnered many accolades, including 12 Grammy nominations.
Their music is so integral to the Cajun culture that they have been featured on the New Orleans-based hit HBO program Treme. Tickets range from $39 to $54.
A Chicago tribute band wraps up the month with a performance on Saturday, Feb. 26 at 7:30 p.m. in Hinman auditorium.
Chi-Town Transit Authority is an 8-piece mega-polished band hailing from Atlanta, but dedicated to reproducing the music of supergroup Chicago and their full-on rock, soul and horns concert experience. Chi-Town features a tight horn section along with the soaring vocal harmonies that Chicago is famous for. Hear them perform all their classic hits, from more than four decades of rock’s golden age. Chi-Town is the Jazz-infused big-band that will bring the house down—this is “Only the Beginning.”
Hinman Auditorium is located at 10150 Bonita Beach Road in Bonita Springs. For tickets and info, call 239-495-8989 or go to www.artcenterbonita.org