There is a play whose title is a promise to its audience. You are guaranteed to exit the theater laughing after Exit Laughing, Charlotte Players’ January offing at the Langdon Playhouse in Port Charlotte.

In bridge, a person strategically plays an exit card to give up the lead, knowing the opponents will win the trick. In life, making an exit could mean many things. Exit can also be a euphemism for death, along with demise, departure, passing, resting, etc.S

Playwright Paul Elliott brought all this together in Exit Laughing, a play about death, bridge, and laughter. The story concerns Connie, Leona, and Millie, three southern ladies from Birmingham whose weekly highlight for 30 years was their bridge game with the “girls.” After one of their foursome, Mary, dies, they decide to continue the tradition. 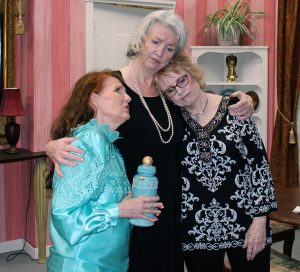 At their first weekly card game since Mary’s “exit,” the slightly ditzy Millie decides to “borrow” Mary’s ashes from the funeral home and bring the urn to the game. What evolves is the wildest, most exciting night of their lives, involving a police raid, a stripper, and a whole new way of looking at all the fun you can have when you are truly living.

Exit Laughing”was a winner of the AACTNewPlayFest, a national new play festival that takes place over a two-year period. At its premiere in Missouri, the play broke all records for a non musical in the Springfield Little Theatre’s 50-year history. 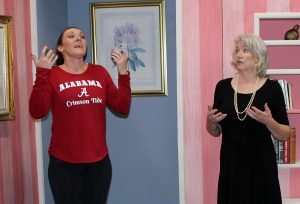 Elliott’s plays are produced all around the world. Finding the Burnett Heart, an award-winning comedy-drama, made its Hollywood premiere following a successful run at the historic Detroit Repertory Theatre. Gentle Passage was the flagship production of the 2012 Hollywood Fringe Festival before winning Best Gay Play of 2014 at the Chicago Pride Film and Theatre Awards.

Jessie Reter-Choate is directing “Exit Laughing” for the Charlotte Players. The play opens on Jan 6. There are seven 7:30 p.m. shows and a trio of 2 p.m. matinees. Tickets are $22 for adults and $11 for students and may be ordered at www.charlotteplayers.org or by calling 941-255-1022. The Langdon Playhouse is located at 1182 Market St., Port Charlotte.

Policeman Bobby (Jeff Webster) threatens to write the bridge ladies a ticket, while Rachel Ann (Jennifer Miles) observes from a doorway. He will give them much more than a citation later.