By Joy Ursillo
Cultural Park Theater begins February with the hilarious comedy, Play On – a play by Rick Abbott. Opening Feb. 3 and running through Feb. 13, this hilarious story is about a theater company desperately trying to produce a play, in spite of maddening interference from the haughty author who keeps revising the script.
As the actors move from scene to scene, our final act is the performance of the actual play, where anything that can go wrong does! When the author decides to give a speech on the state of the modern theater during the curtain calls, the audience is treated to a madcap climax and a thoroughly hilarious romp. Even the sound effects reap their share of laughter. Performances are Thursdays and Fridays at 7 p.m. and Saturdays and Sundays at 3 p.m.. 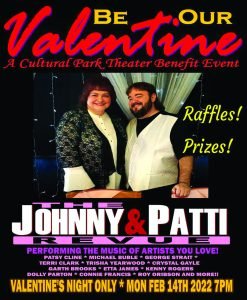 Johnny & Patti Russo
We’re excited to bring Johnny and Patti Russo back to our concert stage with their Valentine’s Day Concert for Lovers and Others. Live on our stage for just one performance on Feb. 14 at 7 p.m., Johnny and Patti will perform love-themed tunes as well as other favorites as they entertain. Tickets are $25. Call the box office today to reserve your seats. This duo is a favorite of our patrons and always draws a big crowd.

Volunteer Fair
Our 2022 Volunteer Fair is being held Feb. 22, and we look forward to welcoming new volunteers to join our existing crew. Join us from 10 a.m. to 1 p.m. and find out where your special skills can be put to good use for us.

25th Annual Putnam County Spelling Bee
Rounding out the month, we open The 25th Annual Putnam County Spelling Bee on Feb. 24. This classic production follows an eclectic group of six mid-pubescents as they vie for the spelling championship of a lifetime.
While candidly disclosing hilarious and touching stories from their home lives, the tweens spell their way through a series of (potentially made up) words, hoping to never hear the soul-crushing, pout-inducing, life-unaffirming “ding” of the bell that signals a spelling mistake. Six spellers enter; one speller leaves! At least the losers get a juice box! Performances run through March 6, with shows Thursdays and Fridays at 7 p.m., Saturdays and Sundays at 3 p.m.
Cultural Park Theater strongly suggests that all staff, volunteers and patrons wear a mask when inside our building. Social distancing is still being practiced and we continue to take temps of anyone entering our facility.
The Cultural Park Theater is located at 528 Cultural Park Blvd. in Cape Coral. Call the box office for more information at 239-772-5862.