Galloway Direct presents the musical stylings of Dr. Hobbs on Saturday, Sept. 7 at 7 p.m. The concert will take place at Galloway Direct, on South Tamiami Trail, just two miles south of the Bell Tower Shops in Fort Myers.
Food trucks will be on site to provide drinks, snacks and meals.
There is no charge for admission, but each guest can enter with a minimum donation of one can of food. The food donations will go to support Community Cooperative, an innovative nonprofit organization made up of social service entrepreneurs fighting to end homelessness and hunger in Fort Myers and the greater Lee County area.
Dr. Hobbs is a recently formed rock act that features Randy Jackson from Zebra and Jefferson Starship, Larry Hobbs from the Robin Zander Band and Steve Luongo from the John Entwistle Band, Leslie West from Mountain (Mississippi Queen).
At 4 p.m., a select few will be permitted to watch Dr. Hobbs perform a pre-show sound c 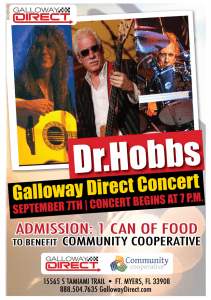 heck prior to the concert, as well as participate in a special VIP meet and greet with the band members.
Guitarist Randy Jackson is a rock musician from New Orleans, and best known for his role as front man for the band Zebra. He was born and raised in New Orleans. In addition to his career with Zebra, he is a Long Island Music Hall of Fame inductee, a Louisiana Music Hall of Fame inductee, and has toured with Jefferson Airplane and orchestra tributes to Led Zeppelin, Pink Floyd, and The Doors.
Bassist Larry Hobbs comes from a jazz background. A wonderfully schooled musician who can read or improv with the best of them. In the rock ‘n’ roll world Larry is best known as the bassist in the Robin Zander Band. When Robin decided to form a solo project, Hobbs was the only musician considered to fill the bass slot. Larry toured with The Robin Zander Band for three years.
Drummer Steve Luongo spent his life touring the world with some of the biggest names in the music industry, including John Entwistle (The Who), Todd Rundgren, Brian Johnson and Cliff Williams (AC/DC), Leslie West (Mountain), Eddie Money, and Jack Bruce (Cream). Steve Luongo is one of the most respected and influential drummers of his day and has recently completed work on the third album from Bruce Bumstead.
For more event details, call Galloway Direct at 888-504-7635 or visit www.gallowaydirect.com.