Florida Repertory Theatre’s season continues with Alfred Uhry’s modern classic Driving Miss Daisy. The Pulitzer Prize-winning play is a timeless story about the power of friendship and the endurance of human connection. Driving Miss Daisy runs in the ArtStage Studio Theatre Jan. 21 – Feb. 13, with discounted previews Jan. 18 – 20.
“This classic story chronicles a decades-long friendship, and is a love-letter to how affirming a strong friendship can be in our lives,” said artistic director Greg Longenhagen. “It is the perfect piece to kick off the new year in the ArtStage Studio Theatre. The production brings a dream-team of our ensemble members and recent guest artists, and you won’t want to miss it. This season was meant to celebrate stories that lift us up and bring us together, and there isn’t a play that does those things better.”
Driving Miss Daisy tells a hopeful, funny,and heartfelt story that explores the transformative power of friendship. What begins as a clash of wills between a stubborn Jewish matriarch and a proud black man evolves into a generation-long friendship as the two navigate Civil Rights-era Atlanta. The play premiered at Playwrights Horizons in 1987 starring Dana Ivey and Morgan Freeman, and went on to win the Pulitzer for Drama. The now-classic film adaptation starring Jessica Tandy alongside Freeman took home the Best Picture Oscar in 1990. Recent London and Broadway revivals have starred James Earl Jones, Lynn Redgrave, and Angela Lansbury in the groundbreaking roles of Daisy and Hoke. 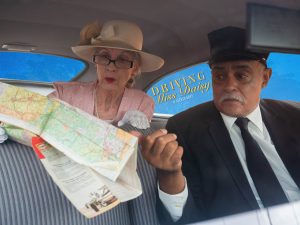 Florida Rep’s production stars ensemble member Sara Morsey as Daisy, guest artist Mujahid Abdul-Rashid as Hoke, and ensemble member Jason Parrish as Daisy’s son, Boolie. Morsey returns to the stage after playing a string of iconic women in Florida Rep’s The Glass Menagerie, August: Osage County, The Little Foxes, Dividing the Estate and Steel Magnolias – as well as originating the role of Bib the Goat in the National New Play Network Rolling world premiere of Alabaster in 2020.
Abdul-Rashid returns to Florida Rep after his acclaimed performance as Troy Maxson in Florida Rep’s production of August Wilson’s Fences. No stranger to August Wilson’s work, Abdul-Rashid’s career includes multiple appearances in six of Wilson’s American Century Cycle plays all over the country. Associate artistic director and frequent director
Jason Parrish returns to the stage in Driving Miss Daisy for the first time since appearing in Cabaret and How the Other Half Loves in 2018, and is also well-known for his work in six seasons of the snarky holiday comedy The Santaland Diaries.
Tickets start at $59 for regular performances and $39 for discounted previews, and are available online at www.FloridaRep.org and through the box office at 239-332-4488. 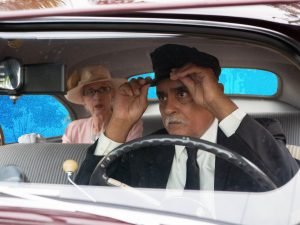