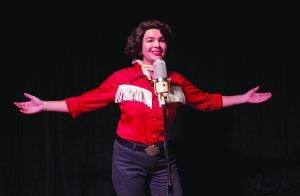 Florida Repertory Theatre announces the opening of Always…Patsy Cline in the ArtStage Studio Theatre to kick off its new season.
Created and originally directed by Ted Swindley, Always…Patsy Cline plays in the intimate 120-seat venue Sept. 27 to Nov. 24.
The run features four nearly sold-out discounted preview performances Sept. 24 to 26.
This heartfelt and compelling true story celebrates the most popular female country singer in recording history and is told through the eyes of her biggest fan and unlikely best friend, Louise Seger. Patsy Cline’s legendary voice and rise to stardom took America by storm, and from her early performances in dusty Texas honky-tonks to sell-out concerts at the Grand Ole Opry, Patsy’s music left an indelible mark on country music and American culture. This musical tribute features all of her most beloved songs, “Walkin’ After Midnight,” “I Fall to Pieces” and the number one Jukebox hit of all time, “Crazy!”
“What a delight to open our new season with a musical salute to one of the greatest female recording artists in American music history,” said Florida Rep artistic director Greg Longenhagen. “This musical premiered Off-Broadway over 30 years ago, and it remains one of the most popular and most beloved not only because it’s packed with all of Patsy’s greatest hits, but because it is filled with humor, hope, and is a love-letter to the power of friendship. We’ve also assembled an all-star cast, including one of the original cast members, Becky Barta, who’s performed both roles extensively across the country since its original New York run. You are in for a treat – if you can get a ticket.”
Always…Patsy Cline stars Becky Barta as Louise Seger and Bethany Gwen Perkins as Patsy Cline, and both New York actresses have a history with the musical. Perkins reprises her role after a recent appearance at The Depot Theatre in Ithaca, N.Y., and Barta’s appearance at Florida Rep marks her 30th production of the musical. Barta has played both Patsy and Louise in productions across the country since her appearance in the original Off-Broadway production.
Florida Rep ensemble member Maureen Heffernan directs the production after recently helming Florida Rep’s The Miracle Worker, Sylvia and others. Heffernan is joined by musical director Alex Shields (Cabaret), set designer Tim Billman (Too Marvelous for Words), costume designer Kristina Tollefson (Florida Rep debut), sound designer Katie Lowe (Million Dollar Quartet) and ensemble stage manager Amy Massari (Native Gardens).
Always…Patsy Cline is already breaking box office records in the ArtStage Studio Theatre, and the run is already extended to Nov. 24 due to overwhelming demand. Tickets start at $55 for regular performances and $35 for discounted previews. For this musical, on stage cafe table seating is available for $75, and includes two drinks per person and table service. Tickets are available online at www.FloridaRep.org and through the box office at 239-332-4488.
Subscriptions are also on sale now and offer the best seats at the biggest discount. Packages for six to nine shows are now on sale and start as low as $174 for six plays. The popular six-show Arcade Theatre Rush Pass is now on sale for $175 and offers the best available seats in the Historic Arcade Theatre 90-minutes before any performance. Subscriptions are available through the box office at 239-332-4488 or toll-free at 877-787-8053.
Performances are Tuesday – Thursday at 7 p.m., Friday and Saturday at 8 p.m., and Thursday, Saturday and Sunday at 2 p.m.
Again this season, Florida Rep’s parking lot will open 2 hours before each performance and offers guests free parking across the street from the Arcade Theatre.
Florida Repertory Theatre performs in the Historic Arcade Theatre and the ArtStage Studio Theatre on Bay St. between Jackson & Hendry with limited free parking in the Fort Myers River District.