Florida Repertory Theatre has announced its reimagined 2021-2022 season in the Historic Arcade Theatre and the ArtStage Studio Theatre, setting a first indoor performance for Sept. 28.
After an 18-month intermission, the company plans to return to a full nine-show season bringing professional theatre back to the heart of the downtown Fort Myers River District.
“We’ve been waiting for months to announce our exciting new plans for the 2021-2022 Season,” said artistic director Greg Longenhagen, “but we can’t move forward without looking back to thank our senior staff, ensemble of artists, volunteers, and loyal patrons and donors for sticking by us as we weathered this storm. Because of our staff’s tireless work and our patrons’ unwavering support, we will emerge stronger than ever, and I am deeply grateful.”
Longenhagen continued, “You’ll recognize many of these titles from our postponed 2020-2021 season, but there are some impactful changes and outstanding additions. As we emerge from almost two years of isolation and virtual interactions, we wanted to offer you stories about hope, human connection, and renewal. Florida Rep’s signature wide variety remains intact, but we’ve coalesced around themes that lift us up and offer an escape. We cannot wait to see you inside the theatre soon!” 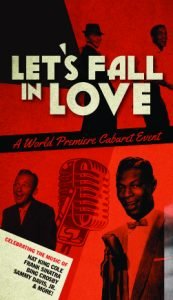 The 2021-2022 season opens in the ArtStage Studio Theatre Sept. 28 with Let’s Fall in Love: A World-Premiere Cabaret Event saluting Nat King Cole and a host of singers from the 1940s, 50s, and 60s who made the era a golden age of American music. Chicago-based performer, Evan Tyrone Martin, stars in the concert that pays homage not only to Cole, but to Tony Bennett, Sammy Davis, Jr., Bing Crosby and more.
The Historic Arcade Theatre opens Oct. 26 with the thrilling ghost story The Woman in Black adapted by Stephen Mallatratt from the novel by Susan Hill. The season continues with an unprecedented co-production between Florida Rep and its Education Department’s Conservatory Program. Young artists from across Southwest Florida will join a professional cast of Florida Rep ensemble members and guest artists in the classic American musical, West Side Story, which opens Nov. 23.
Florida Rep begins the new year with two uplifting stories about love, new beginnings, and friendship: a brand-new comedy Morning After Grace by Carey Crim, and the Pulitzer Prize-winning classic Driving Miss Daisy by Alfred Uhry.

Morning After Grace is an unconventional new comedy set in a Gulf coast retirement community that tackles love, loss, growing older with style, and opens Jan. 4 in the Arcade Theatre. Set in post WWII Atlanta, Driving Miss Daisy tells a timeless story about an unlikely friendship that lasts a lifetime. The modern classic begins performances in the ArtStage Studio on Jan. 18.
Into the Breeches by George Brant opens to previews Feb. 8 in the Arcade Theatre. This brand-new comedy is a patriotic and heart-warming story of coming together in a crisis and follows a theatre troupe during World War II. The men are overseas, and for the ladies of the company, the show must go on! They decide not to cancel their production of Shakespeare’s Henry V, and step into all the roles – forging new bonds of sisterhood in the process.
The most exciting addition to the new season is a reimagined remounting of the theatre’s shuttered 2020 production of A Doll’s House, Part 2 by Lucas Hnath. The electrifying and razor-sharp sequel to Ibsen’s 1879 masterpiece was one day away from its first audience when the theatre closed its doors in 2020.
The same cast and creative team are assembled for the 2022 staging of A Doll’s House, Part 2, but it’s not a direct remount. The new production is slated to run in the intimate ArtStage Studio Theatre, which means audiences will be in the center of the action as Nora Helmer confronts her past, her ex-husband, her now-grown daughter, and their long-suffering housekeeper. This time when the sparks fly, audiences will have a front-row seat.

The Arcade lineup comes to a sensational end with with the original rock ‘n’ roll musical Buddy: The Buddy Holly Story by Alan Janes. Opening March 15, the musical shows audiences how Buddy Holly became the musical legend he is today.
The final offering in the 2021-2022 season is Audrey Cefaly’s new romantic comedy, Maytag Virgin, opening April 12 in the ArtStage Studio. One of the hottest plays in America right now, “Maytag Virgin” is an old-fashioned southern romance about two people who thought they’d never find love again. This captivating and often hilarious love story has the perfect message to conclude a season built on renewal, redemption, and connection.
Single tickets are on sale now at www.FloridaRep.org along with subscription order forms and more information about each production. To order tickets or a subscription over the phone, call the box office at 239-332-4488.