TheatreZone in Naples launches 2022 with three January productions: a 1970s satire of the sexual revolution, Simon & Garfunkel’s epic Central Park concert, and the world premiere of a little-known Frank Sinatra life event.
First up is I Love My Wife which plays Jan. 13 – Jan. 23. Praised by TheatreZone’s founder and artistic director Mark Danni as “the most wildly funny show I have ever seen.” It is a hysterical satire of the sexual revolution of the 1970s.
The musical takes place on Christmas Eve in suburban Trenton, N.J., where two married couples contemplate a menage-a-quatre. The musicians are on stage as a Greek chorus, commenting on the action in multiple elaborate costumes for a truly innovative performance.
Performances are 7:30 p.m. from Jan. 13 through Jan. 23, and 2 p.m. on Jan. 16, 17, 22 and 23. 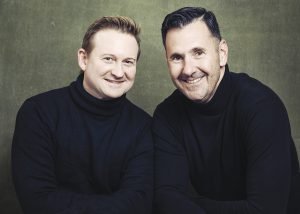 Simon & Garfunkel: Live in Central Park
On Jan. 17, TheatreZone presents two performances of Simon & Garfunkel: Live in Central Park, revisited. The musical recalls the September 1981 free benefit concert given by the folk-rock duo in New York City’s Central Park. It drew a half a million people and became the seventh-largest concert to date in U.S. history. The set list includes hits such as “The Sound of Silence,” “Mrs. Robinson,” “The Boxer” and “Late in the Evening.” Performances are 4 and 7:30 p.m. on Jan. 17.

The Feud: Sinatra & Roselli
Rounding out the month’s lineup is the Jan. 29 world premiere of The Feud: Sinatra & Roselli, 2 Guys from Hoboken. The poignant story focuses on the 40-year professional and personal feud between Frank Sinatra and Jimmy Roselli, two great singers who lived on the same block in Hoboken, N.J.
The Feud was written by Dennis DelleFave, Roselli’s cousin and road manager, in collaboration with TheatreZone’s Mark Danni. Sinatra, 10 years Roselli’s senior, achieved success first, reputedly with mob backing, which Roselli refused, opting to represent himself at smaller nightclub venues. Roselli achieved great renown in the Italian American community. “The Feud’s got it all: the great Sinatra songbook, Italian songs that Roselli made famous, and much more from the ‘40s through the ‘70s,” said Mark Danni. The performance is staged at 2 and 7:30 p.m. on Jan. 29.
Show tickets may be purchased at www.Theatre.Zone and are $50 – $85 per person depending on show and seat selection.
TheatreZone was established in 2005 by Mark and Karen Danni.
TheatreZone is located at the G&L Theatre on the Community School of Naples campus.
For tickets and more info, call 888-966-3352, ext. 1.