One of the nation’s longest-running interactive theatrical productions, Joey & Maria’s Comedy Italian Wedding, with 30 years of performances worldwide, debuts in Naples on Nov. 12 at The Ballroom at the Naples Women’s Club. The show is produced by its creator and writer, Bonita Springs resident Darlyne Franklin.

Joey & Maria’s Comedy Italian Wedding hosts the audience as if they are all part of a huge Italian family. Darlyne Franklin wrote the script in Boston in 1992 based on the hilarity of her Italian family’s weddings. The show was an immediate hit and has enjoyed nonstop engagement ever since. Joey & Maria’s Comedy Italian Wedding has run in over 19 major cities across the U.S. including Los Angeles, Palm Springs, San Diego, Las Vegas, Boston, and New York. It has also been performed in the U.K., Greece, Ireland, Australia,and Canada.

Franklin shares that the show was inspired by trending interactive murder mysteries and the popularity of karaoke. She realized that people want to be part of an experience and not just spectators. Tapping her acting and television writing experience based in Boston and Los Angeles, she wrote about her own family’s traditional Italian weddings. “The dad chooses the music, the uncle sings Mack the Knife, the groomsman makes a revealing toast about the groom, Nonna sings the wrong lyrics to Cellaluna, someone drinks too much, someone gets a ”weekend pass from jail’ from the Governor. You know, a regular wedding! It’s a blast.”

The audience is part of the family, she explains. “The dance floor opens for all the guests to do the chicken dance or a conga line. Actors joke and interact with the audience, an ex-girlfriend may flirt too much, an audience member may become the ‘godfather’ just out of jail, and someone may find a wad of money under their seat.”

Joey & Maria’s Comedy Italian Wedding at the Ballroom at the Naples Women’s Club, 570 Park St., will run seven days a week from Nov. 12 through April.

Tickets are $75 per person in November and December and $85 per person from January through April, and include the performance, a three-course dinner by Artichoke & Company, and a cash bar. 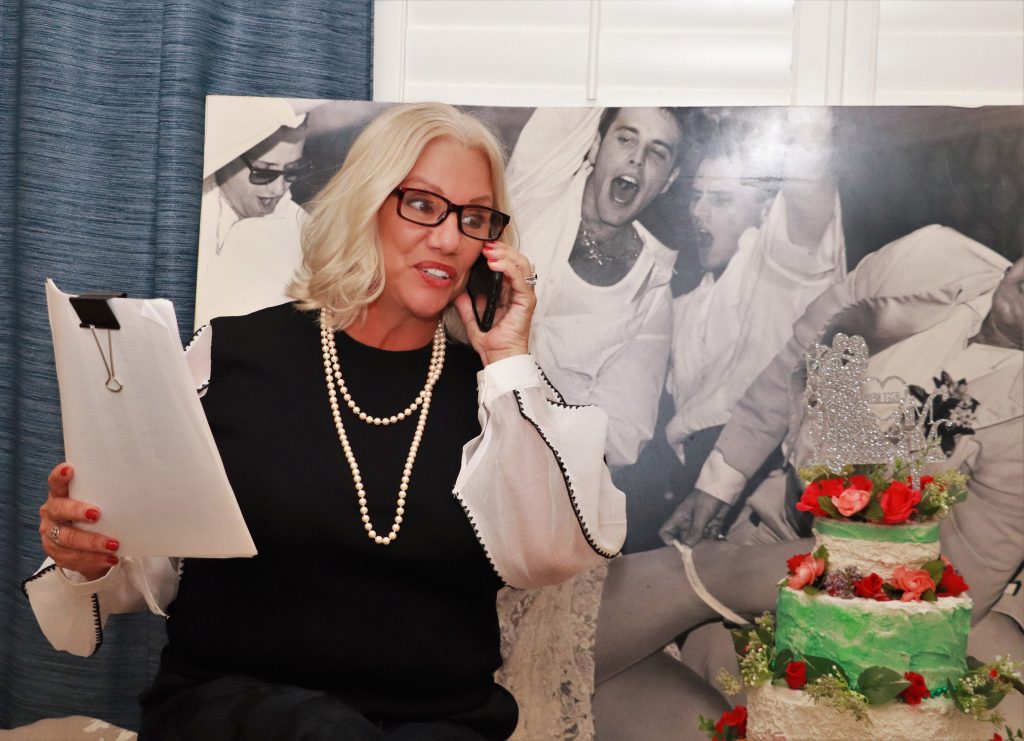 Darlyne Franklin’s company, Darlyne Franklin Productions, is an entertainment production company focusing on the creation, development and production of live, interactive performances. In addition to Joey & Maria’s Comedy Italian Wedding, Franklin has created shows such as The Wake of Matty O‘Malley, and The Soprano’s Last Supper which was performed in Las Vegas venues for over six years and was featured on the TV game show Jeopardy.

Franklin’s recent work includes The Biscotti Sisters and the Wicked Real Housewives of Boston, which opened in the Boston area in 2010. “Housewives,” she says, “is an entirely new concept in interactive theater based on a mock reality TV show. It’s a show within a show.”

Darlyne Franklin’s acting credits also include the role of Celia in The Calendar Girls at The Naples Players. In 2020, she won the 24-hour playwriting competition at the Laboratory Theater of Florida in Fort Myers.

In October 2021, she participated in her second 24-hour playwriting competition at the Laboratory Theater of Florida. Reviewer Tom Hall of ArtSWFL.com commented on her Burnt Toast script’s “smart, snappy repartee and pithy comments made by characters about the situation in which they find themselves.”

Based in Boston early in her career, Franklin helped pioneer reality television with two documentaries for which she won Cablevision ACE awards. One documentary was about Cambodian refugees in Boston. The other ACE award was for “most original TV series,” and depicted real-life dramas in the Massachusetts General Hospital emergency room, as well as Franklin trailing ambulances throughout the city.

Franklin’s education and training include the Lee Strasberg Theatre Institute, the Groundlings, and Second City. She studied theatre at Emerson College in Boston and completed the sketch writing and improvisation programs at Upright Citizens Brigade in Los Angeles.