Florida Repertory Theatre’s 2021-2022 season continues with Morning After Grace by Carey Crim. The brand new comedy kicks off the new year with laughs and a heartwarming, late-in-life story of love.
Morning After Grace runs in the Historic Arcade Theatre Jan. 7 to Jan. 26, with discounted previews Jan. 4 – 6.
“We are thrilled to continue our season with this uplifting and outrageous comedy about the power of connection,” said artistic director Greg Longenhagen. Morning After Grace shows us we can move forward after a loss and that it is never too late to take a chance on love or engage a new beginning. I suspect that many Southwest Florida audience members will identify with these characters – the play takes place in a Gulf Coast retirement village. I hope you’ll join us for some well-deserved laughter!”
Morning After Grace follows retirees Angus and Abigail, who after hooking up at a funeral, find themselves wrapped in sheets and questioning their choices. Enter next-door neighbor Ollie, a former Detroit Tigers player who’s traded his mitt for golf clubs and a yoga mat, and all bets are off for a peaceful retirement. Nothing is as it seems with this trio, and every revelation brings new laughs!
Florida Rep’s production stars Martin LaPlatney and Katrina Ferguson as Angus and Abigail, and Marvin Bell as Ollie. 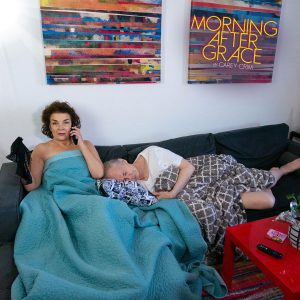 LaPlatney returns to Florida Rep after appearances in Outside Mullingar and One Slight Hitch, and Ferguson returns after making her Florida Rep debut in Neil Simon’s Barefoot in the Park.
Bell makes his Florida Rep debut in Morning After Grace, but is no stranger to Southwest Florida, after his recent appearance in August Wilson’s Radio Golf at Gulfshore Playhouse earlier this season.
Florida Rep ensemble member Chris Clavelli returns to Florida Rep after directing Ken Ludwig’s A Fox on the Fairway and A Doll’s House, Part 2 in the 2019-2020 season. Clavelli is joined by an expert creative team, including set designer Kim Powers (Florida Rep debut), costume designer Charlene Gross (A Gentleman’s Guide to Love & Murder), lighting designer Rob Siler (Alabaster), sound designer Adam Trummel (West Side Story), and ensemble stage manager Janine Wochna (The Woman in Black).
Performances are Tuesday through Saturday at 7 p.m., Wednesday, Saturday and Sunday at 2 p.m., and 8 p.m. for the opening night gala performance on Friday, Jan. 7.
Florida Rep’s parking lot opens 2 hours before each performance and offers guests free parking across the street from the Arcade Theatre.
Until further notice, Florida Rep is operating with enhanced health and safety measures, and current protocols are outlined at the theatre’s website at www.floridarep.org/buy-tickets/protocols-for-safety/
Tickets start at $59/$55 for regular performances and $39/$35 for discounted previews, and are available online at www.FloridaRep.org and through the box office at 239-332-4488.
Florida Repertory Theatre performs in the Historic Arcade Theatre and the ArtStage Studio Theatre on Bay St. between Jackson & Hendry with free parking in the Fort Myers River District.