Players Circle Theater will open its 2022-23 professional theater season with the hilarious comedy Murder at The Howard Johnson’s on Tuesday, Nov. 1.
This Broadway screwball comedy about three murder plots that go hysterically wrong, will star nationally known comic and area favorite RC Smith, Angela Watson from TV’s Step by Step (7 seasons), which she co-starred with Susan Summers and Patrick Duffy, and local favorite Steven Coe, who last year starred in Players Circle Theater’s, Lifespan of a Fact.
The play is directed by Robert Cacioppo.
This 1980 Broadway comedy written by Ron Clark and Sam Bobrick has been called “A Holiday of Laughter” by NBC-TV since its three fast-paced scenes take place on Christmas, July 4th and New Year’s Eve. In Murder at the Howard Johnson’s, we see a dentist (Steven Coe), his lover (Angela Watson) and her used car dealer husband (RC Smith) all trying to kill each other on three successive holidays.
“Just as Mel Brooks satirized cowboy westerns in Blazing Saddles and Hitchcock movies in High Anxiety, playwrights Clark & Bobrick cleverly satirize sexuality charged murder mystery’s like Double Indemnity and The Postman Always Rings Twice,” says Cacioppo.
The local production features set design by Stephen McLean, lights and sound design by Tyler Omundson, costume design by Terri Schaefer and stage management/props by Renee Ludwig.
“This has been an extraordinarily difficult time for many Southwest Floridians. It has been said that laughter is the best medicine, so we are delighted to open our 2022-23 season with this fun escapist play! Amazingly our theater at the Shell Factory, its lobby and restaurant suffered no damage. We were going to open Oct. 25, but wanted to give our beloved community another week to heal,” says producing director Carrie Lund Cacioppo.
Co-founders of Players Circle, Robert and Carrie Cacioppo are no strangers to Murder at the Howard Johnson’s, having produced it starring Carrie and directed by Robert in 1992 at Sanibel Island’s Pirate Playhouse. They also produced it twice at Florida Rep, which they were co-founders, both in 2000 and 2015. “It’s just one of those shows that audiences really get to relax, unwind and have fun,” says Cacioppo. 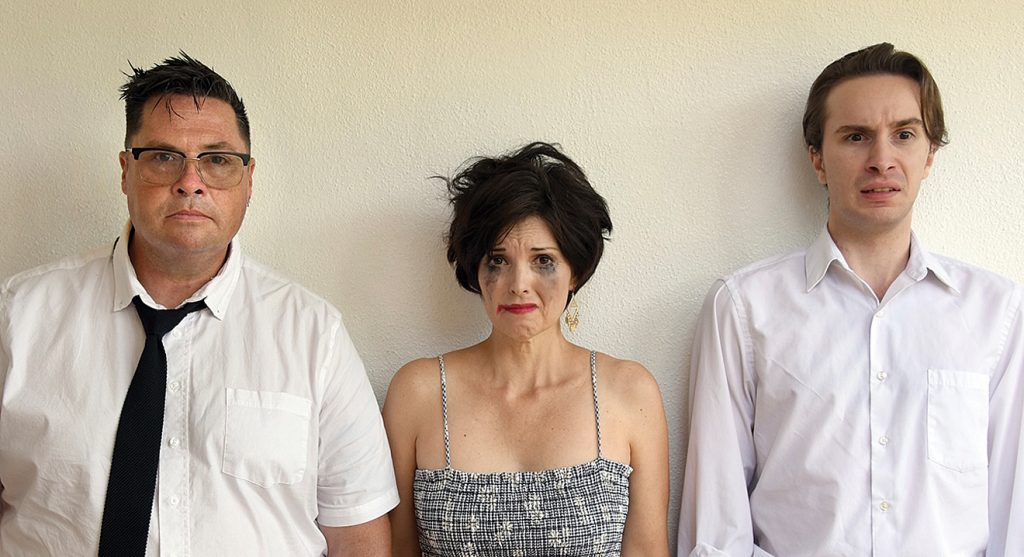 Discounted previews run from Nov. 1 – 4, Tuesday – Thursday at 7 p.m. and Fridays at 8 p.m. All tickets for previews only $30. Opening Nights take place on the first Saturday of each production with a complimentary champagne and musical entertainment 30 minutes before 7 p.m. curtain.
Performances run Nov. 1 – 20. All performances are at 7 p.m. except Fridays at 8 p.m. and Sundays at 2 p.m. VIP tickets are $50 for south section (center section) and front rows on east and west sections. General side section tickets in east and west sections in rows 2-5 are only $35. Subscription packages start at four shows for as little as $100. For more information or to purchase tickets or subscriptions, call 239-800-3292 or go online at Playerscircletheater.com.
Murder at the Howard Johnson’s is performed in thrust configuration with audiences on three sides. Only 150 seats with no seat more than four rows from the stage. Parking is free. Dinner is available in Southern Grill Restaurant adjacent to theater’s lobby (call 239-995-3999 for reservations) or enjoy the new upscale menu available in the theater’s lobby to theater patrons only, must be seated 90 minutes before the show. Enjoy a free glass of wine with every entree purchased. For dinner reservations, tell box office when ordering your tickets at 239-800-3292.
To view the new lobby menu, go online at www.Playerscircletheater.com. Players Circle Performing Arts Center at the Shell Factory is located at 15644 North Tamiami Trail, North Fort Myers.