The Off Broadway Palm Theatre presents Over The River And Through The Woods playing Jan. 13 through March 5.

This hysterical, family comedy is written by Joe DiPietro and directed by Off Broadway Palm’s artistic producer,Paul Bernier.

Nick is a single, Italian-American guy from New Jersey who sees both sets of his grandparents every Sunday for dinner is offered his dream job that would take him away from New  Jersey. The news doesn’t sit well with his beloved, but pesky, grandparents. Thus begins a series of schemes to keep Nick around including bringing the lovely—and single—Caitlin O’Hare to dinner as bait.

The Off Broadway Palm is an intimate theatre, located in the main lobby of Broadway Palm. Performances are Tuesday through Sunday evenings with selected matinees. Ticket prices range from $45 to $65 with discounts available for groups of 20 or more. Tickets are now on sale and can be reserved by calling 239-278-4422, visiting BroadwayPalm.com or in person at 1380 Colonial Blvd. in Fort Myers. 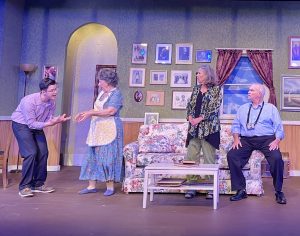