Two exclusive exhibitions will be on display in January at the Sidney & Berne Davis Art Center.
A Darryl Pottorf solo exhibition will be featured in the Grand Atrium. Featured in the Capital Gallery on the second floor, is the collaboration exhibition Quattro Mani by Darryl Pottorf & Robert Rauschenberg. The opening night reception takes place during Art Walk on Friday, Jan. 7 from 6 to 10 p.m. 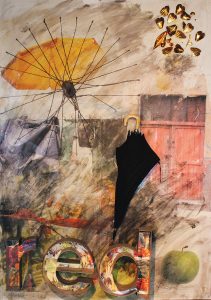 The solo exhibition of Darryl Pottorf will be a representation of 30 years of his work. Demonstrating an overview of the world through his eyes, the many colorful artworks combine, enmesh, and collage symbols, photographs, and imagery. Each piece possesses its own narrative. Pottorf will also feature his iconic Money Series and September 11th series as well as his Links series.
Collaborating with Rauschenberg was an easy transition for Darryl Pottorf. The two were in Venice, Italy, at a Venetian evening celebrating Art for the World, its sponsor, Adelina von Furstenberg, suggested a Rauschenberg-Pottorf collaboration. By coincidence, two pianists began playing on the villa’s grand piano. “Quattro mani” someone announced. “Quattro mani, four hands,” Pottorf translated. He turned to Rauschenberg. “That’s us!” And the idea was born: to make art as partners, looking at the same scenes, Bob photographing in color, Darryl in black and white, then combining the two in one piece. Returning to Captiva, they began their collaboration.
They created four large paintings for the Cloister of San Lazzaro, an Armenian monastery in Venice, which were exhibited at the next Biennale, such as Quattro Mani I (1996.) These pieces captured the historical and contemporary spirit of the city. These four-handed paintings won the highest award given by the Venetian mayor’s office. Sidney Felsen of Gemini G.E.L., the famed studio of master printers in Los Angeles, came to the Biennale, and saw the Quattro Mani works at San Lazzaro. Fascinated by their depth and complexity, he invited the artists to create a Quattro Mani edition in his city, featuring Los Angeles from two merged perspectives.
Both shows will be on display through Friday, Jan. 28. The Sidney & Berne Davis Art Center is located at 2301 First St. in downtown Fort Myers.
For more information, visit www.sbdac.com or call 239-333-1933. 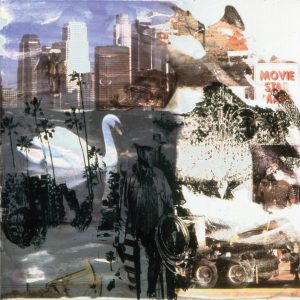