On March 5, the first concert features Jon Nakamatsu, American pianist and Gold Medalist at the Tenth Van Cliburn International Piano Competition. Since winning the Cliburn Gold Medal in 1997, Nakamatsu has toured year-round with today’s leading conductors and orchestras and in recitals and chamber music world-wide. His recording of Gershwin’s Concerto in F and Rhapsody in Blue topped Billboard’s charts for six months. He and renowned clarinetist Jon Manasse tour regularly as the Manasse-Nakamatsu Duo. The two also serve as Artistic Directors of the Cape Cod Chamber Music Festival. Nakamatsu is now Artist-in-Residence of the Chautauqua Piano Program. 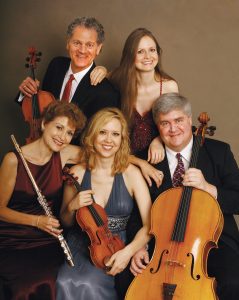 On March 8, the American Chamber Players perform. “They have established standards of chamber music performance equal to any in the world,” to quote The Washington Post. ACP’s Founder and Artistic Director, longtime NPR music commentator Miles Hoffman, is known for creating programs with a delightful mix of instrumental combinations. Cellist Stephen Balderston is a former assistant principal cello of the Chicago Symphony. Joanna Maurer is an associate 1st violinist of the Metropolitan Opera Orchestra. Pianist Anna Stoytcheva won the prestigious Ettore Pozzoli International Piano Competition at seventeen. Sara Stern is solo flutist of the 21st Century Consort at the Smithsonian Institution.

The Boston Trio performs on March 12. “Whenever this trio plays, drop everything and go hear them” hailed The Boston Globe. Pianist Heng-Jin Park, who made her solo debut with the Boston Pops at age 15, is the trio’s founding member and artistic director of Halcyon Music Festival. Cellist Jonah Ellsworth has performed as soloist with the Boston Symphony and Boston Philharmonic, among others. Violinist Grace Park is winner of the 2018 Naumberg International Violin competition and is a member of the Lincoln Center Chamber Music Society.

Members of the Juiliard String Quartet, with Anna Polansky, piano

Performing March 15, the Juilliard String Quartet is celebrating its 75th anniversary with concerts around the world. The Boston Globe hailed The Juilliard String Quartet as “the most important American quartet in history.” The quartet is in residence at Juilliard, and its members are all sought-after teachers in the String and Chamber music faculties. During the summer, the JSQ works on string quartet repertoire with students at the Tanglewood Music Center. Its discography on Sony Classical and Sony Masterworks includes both classical and contemporary works. 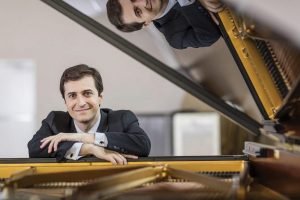 On March 19, American pianist Ken Broberg performs. He first came to international attention when he captured the silver medal at the 2017 Van Cliburn International Piano Competition, followed by a bronze medal at the 2019 International Tchaikovsky Competition. He has been featured on NPR, WQXR, APM’s Performance Today and MPR (Australian) Radio. Broberg’s most recent honor was winning first prize in the 2021 American Pianists Awards.

On March 22, Opera Theater of Connecticut performs “Singing Andrew Lloyd Webber- Superstar of Song and Stage” at 2 and 7:30 p.m. Andrew Lloyd Webber is best known for stage and film adaptations of his musicals Jesus Christ Superstar, Cats, Evita, and the Phantom of the Opera. His honors include a knighthood, seven Tony Awards, three Grammy awards and an Oscar. Alan Mann, noted speaker and opera historian, will punctuate the concert with humorous and informed narratives.

The highly acclaimed Emerson String Quartet performs March 26. The Emerson stands apart in the history of string quartets. They have an unparallel list of achievements for over four decades: more than 30 acclaimed recordings, nine Grammys (including two for the Best Classical Album), three Gramophone Awards, the Avery Fisher Prize and Musical America’s “Ensemble of the Year.” They were inducted into the Classical Music Hall of Fame in 2010. In 2015, the Emerson received The Richard J. Bogomolny National Service Award, the highest award in classical chamber music.
The talented musicians of the Bower School of Music return to Sanibel on March 29 and April 5 following their enthusiastically received debut at the 2021 Sanibel Music Festival Emerging Artist Series. Under the direction of Dr. Kyle Szabo, head of strings studies and Orchestra Director at FGCU, the students are hailed on Sanibel for enthusiasm, energy, and captivating the audience from beginning to end. Emerging Artist Series concerts are performed for free will donations on the Sanibel Music Festival website or at the concert. Pre-register on at www.sanibelmusicfestival.org to assure seating.
Tickets are on sale now at www.SanibelMusicFestival.org; by mail to Sanibel Music Festival, PO Box 1623, Sanibel, FL 33957; and in-person in Sanibel at Bank of the Islands, 1699 Periwinkle Way (check and cash only).
Concerts are presented at 7:30 p.m. on select Tuesdays and Saturdays, with a matinee performance on March 22 at 2 p.m. for the Opera Theater of Connecticut. Emerging Artist Series concerts will be presented in the morning at 11 a.m. on March 29 and April 5. All concerts will take place at Sanibel Congregational U.C.C. at 2050 Periwinkle Way, in the center of the island across from Periwinkle Place.