TheatreZone in Naples has released its 18th season of musical theatre and concerts. The 2022-23 lineup inspired the theme “Romantics & Rockers,” and features shows that originate from luminaries such as Stephen Sondheim, Jimmy Buffet, Marvin Hamlisch, and iconic 80s rock bands.

A Little Night Music Jan. 12 – 22
A Little Night Music, Stephen Sondheim’s 1973 Broadway musical, is a romantic farce about the lives of several upper-middle-class couples set in early 20th century Sweden. It was suggested by Ingmar Bergman’s Smiles of a Summer Night, an evening of sexual musical chairs on the longest night of the year. The couples, mostly mismatched at the start, end up with more desirable partners by the final curtain.

The Goodbye Girl March 9 – 19
The Goodbye Girl is Neil Simon’s 1993 Broadway adaptation of his Academy Award-nominated 1977 film. The Broadway production starred Martin Short and Bernadette Peters and received Tony Award nominations for best musical, best actress in a musical and best actor in a musical. The plot centers on a struggling actor who has sublet a Manhattan apartment from a friend and the current occupants — his friend’s ex-girlfriend and her precocious young daughter.

Rock of Ages April 27 – May 7
Eighties classic rock is a virtual character in Rock of Ages, which has a timeless plot featuring star-crossed lovers and their youthful dramas. The five-time Tony Award-nominated musical originally debuted on Broadway in 2009. It features hits by the most famous glam metal bands of the 80s including Whitesnake, Journey, Bon Jovi, REO Speedwagon, Jefferson Starship and many more.
For more info, visit www.Theatre.Zone or call 888-966-3352 x1. TheatreZone is located in-residence at the 250-seat G&L Theatre on the Community School of Naples campus, 13275 Livingston Road, Naples. 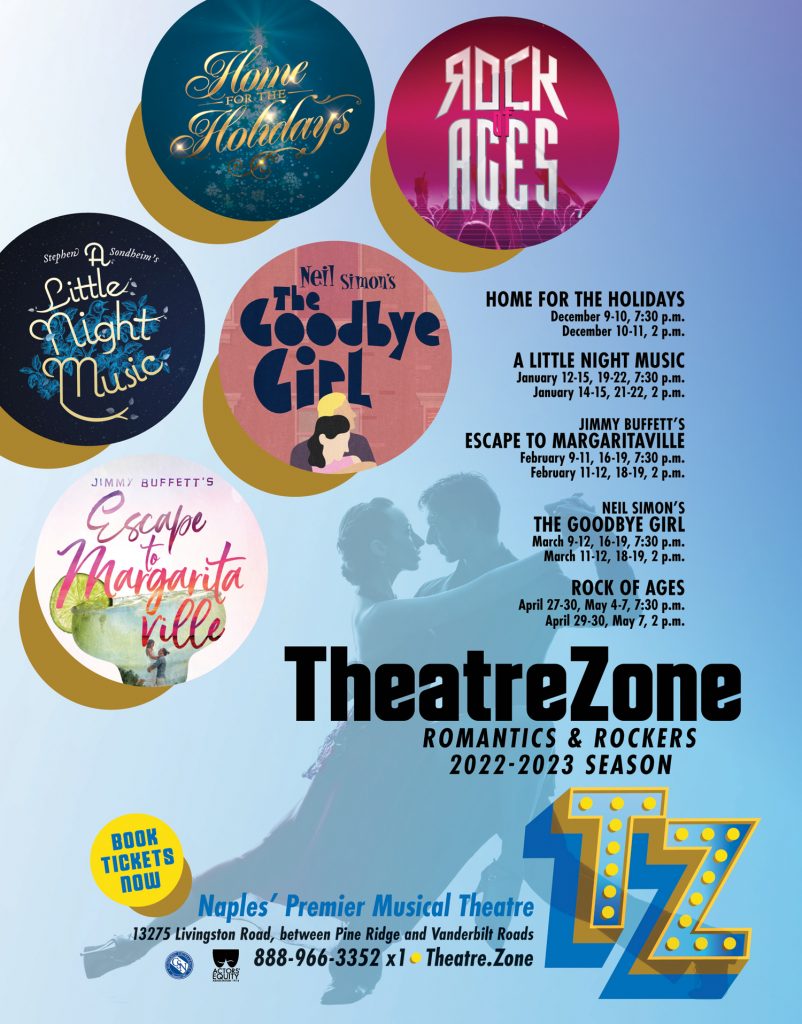