The Laboratory Theater of Florida will present The Play That Goes Wrong by Henry Lewis, Jonathan Sayer, and Henry Shields on Sept. 16. The show runs until Oct. 9.
Officially kicking off its 14th season, The Laboratory Theater of Florida is excited to pay homage to the theatrical arts with a play within a play – where everything that can go wrong does, with hilarious results.
Part Monty Python, part Sherlock Holmes, and all mayhem, this Olivier Award-winning show is disastrously delightful. The fictitious Cornley Polytechnic Drama Society, whose limited funds have allowed them to produce hits such as James and the Peach and The Lion and The Wardrobe, has received a substantial donation to produce an exciting whodunit, The Murder at Haversham Manor.
But “break a leg!” takes on new meaning with this woefully misguided troupe of actors. This play-within-a-play is beset with an unconscious leading lady, a corpse who can’t play dead, a flustered detective, and a literacy-challenged butler who must manage technical gaffes, forgotten lines, and falling scenery. 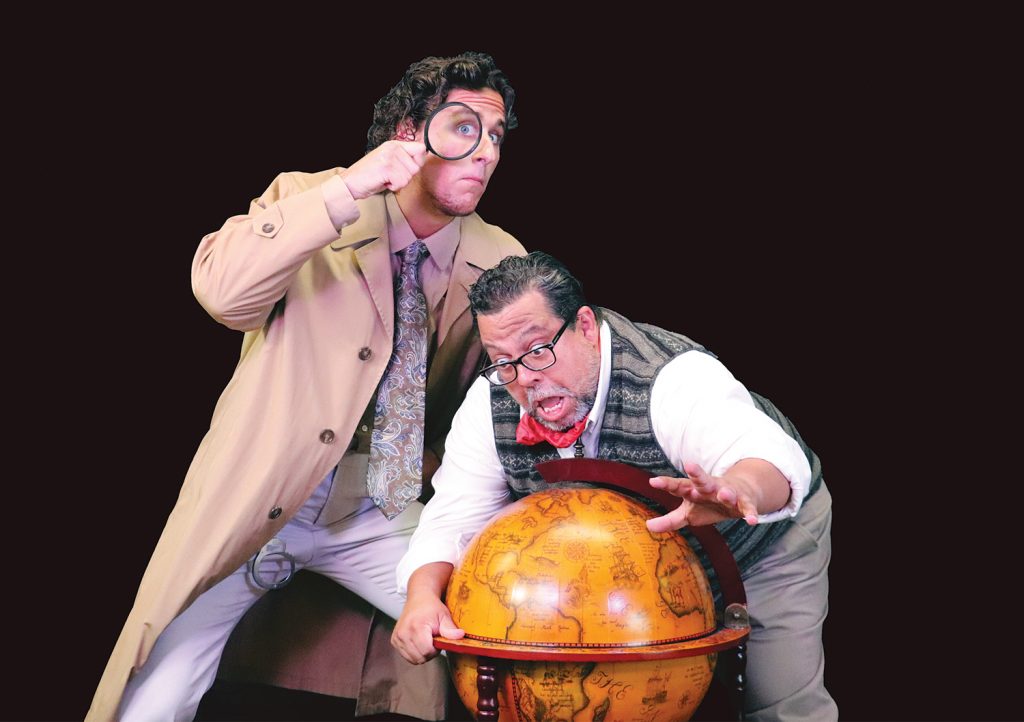 Artistic director Annette Trossbach says, “British actors, a slickly choreographed sword fight, and a murder mystery with more twists and turns than you could hit with a cat make The Murder at Haversham Manor the must-see show of the season. Previously plagued by budgetary constraints, the Cornley Polytechnic Drama Society is thrilled to present this show, which promises to be the most exciting ever. If you enjoyed Noises Off and Play On!, you’ll love The Play That Goes Wrong. Truly, there are so many things that must ‘go wrong’ in this show – choreographing the mayhem for safety and maximum comic effect makes this show one of the most challenging of my career.”
Directed by Trossbach, The Play That Goes Wrong stars Miguel Cintron (Robert/Thomas Colleymoore), Andrew Sarkozy (Chris/Inspector Carter), Giuseppe Anthony (Dennis/Perkins), Danielle Channell (Sandra/Florence Colleymoore), Les Englehart (Max/Cecil Haversham), Heather Johnson (Annie), Matthew Roman (Trevor), and Daniel Sabiston (Jonathan/Charles Haversham).
Scenic design is by Gabrielle Lansden and technical director is Jonathan Johnson. Costumes are by Alena Stevenson, and lights/props are by Steven Michael Kennedy.
This show opens the theater’s 14th season and is included in the season pass, which is on sale now. Performance dates are Sept. 16, 17, 22, 23, 24, 29, 30 and Oct. 1, 6, 7, 8 at 8 p.m.; with matinees at 2 p.m. on Sept. 18, 25, Oct. 2 and 9. Half-price preview nights are set for Sept. 14, 15 at 8 p.m. Staging Teen Success Through Theater performance will be Sept. 17 at 8 p.m. A post-performance talkback will be held on Sept. 25.
Tickets are $30 each or $10 for students with valid student IDs. There are half-priced previews on September 14th and 15th at 8 pm and a new Thursday night special ticket price of $25 each for adults. Socially distant seating may be available and must be scheduled in advance with the box office.
For tickets, call the box office at 239-218-0481 or online at www.laboratorytheaterflorida.com. The theater is located at at 1634 Woodford Ave. in the Fort Myers River District.